The Mt Ruapehu region has great skiing, but it also has some of the most beautiful walks in the country – hiking is the main reason many guests visit. So, strap on your walking shoes, fill your water bottle, and get out there; from Ohakune we have 8 short walks in the area you simply must check out.

This is a gorgeous walk in crisp alpine air, leading you through forest, alpine tussock and scrublands, boardwalks, to a stunning waterfall (which is even better after rainfall). This track is an immediate hit with walkers because it is not too long and is an easy way to take in spectacular alpine scenery and mountain views. If you head up the Ohakune Mountain Road, you’ll come across the Waitonga Falls trailhead at the 11km mark, not far from the alpine treeline. 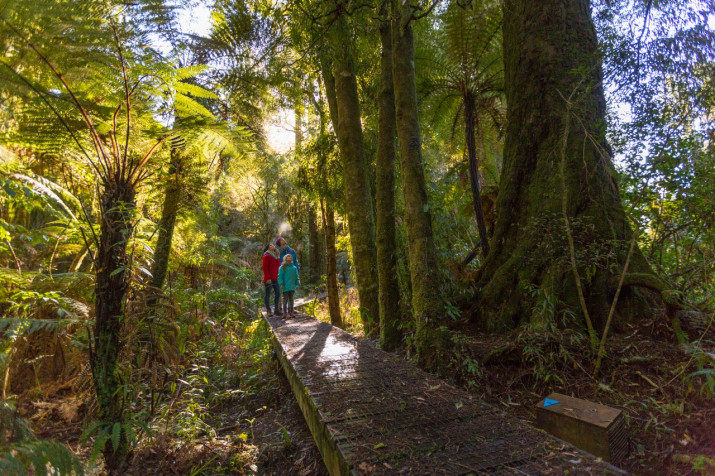 Green spaces are good for the soul (and loved by botanists), and this forested loop certainly delivers – it is packed with native flora such as kāmahi, broadleaf and five finger, while giant rimu, mataī and kahikatea tower above. Many of the trees have named labels. You will find the entrance at the bottom of Ohakune Mountain Road, just before you enter the National Park. The track crosses the Mangawhero river and follows the road, but at a distance that ensures you don’t see the road. A large volcanic crater can be seen at one point. At the top, you cross the Ohakune Mountain Road and head down the track on the other side.

This pretty walk begins 5-7km out of Ohakune and passes two lakes. The track is easy but can be a little overgrown in some places. The first lake is Dry Lake, which has grassy areas great for picnicking. The track then heads to Lake Rotokura, and through its ancient surrounding beech forests. At some points on the track around Lake Rotokura, if the weather is clear and calm, you will see a perfect reflection of Mount Ruapehu on the water. Lake Rotokura is tapu – sacred to mana whenua Ngati Rangi – so fishing is prohibited, and out of respect it is asked that you do not eat near the lake. 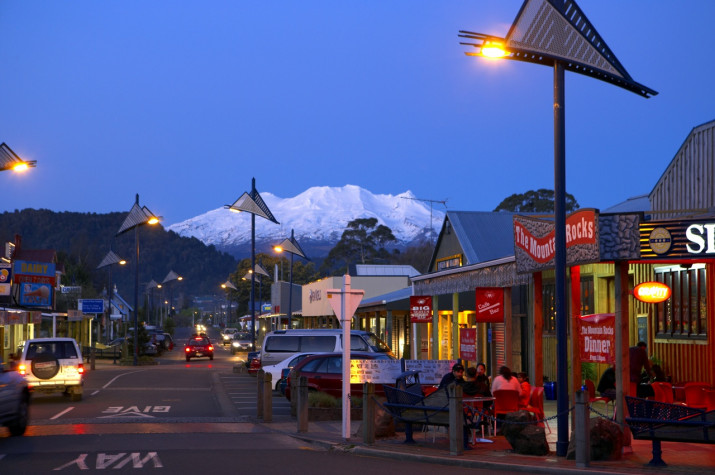 The Ohakune township itself is made for walking and cycling around. Soak up the charm of the place, pop into the shops for your essentials or an artisanal souvenir, then get out into nature. The river walk is gorgeous, winding its way alongside the mountain fed Mangawhero river from Clyde Street at the bottom of town, up to the top (30min). For a longer walk, you could then take on the Mangawhero Forest walk, and on the way back have a beverage while you relax on the balcony at the Powderkeg. Then return back to the Manuka Lodge for a much needs relax!

Taranaki Falls is an easy but varied 2-2.5 hour loop walk from the village, and is part of the Tongariro Northern Circuit. We recommend do this trail clockwise. It takes you through various land types such as tussock, beech forest and volcanic soils. At the head of the loop is the Taranaki Falls, which we think is the most impressive waterfall in the region. A river falls 20m from the edge of a large andesite lava flow (which erupted from Ruapehu 15,000 years ago), tumbling down into a swimmable boulder-ringed pool. You can even walk behind the waterfall and experience its power up close. A bit of a local tip: if you follow the trail steeply up to the left of the waterfall and emerge at the top, don’t follow the Taranaki Falls trail but instead follow along the Tama Lakes trail a few metres and suddenly you’ll be right on top of the waterfall, standing on the lava flow. This un-signposted detour is not for those with young children or a fear of heights, but the view is breath-taking.

Mounds Walk is also 20 min return: the mounds you will see were formed from debris avalanches, at a time when Ruapehu was more active thousands of years ago. The top of the track also has good panoramic views of the area. 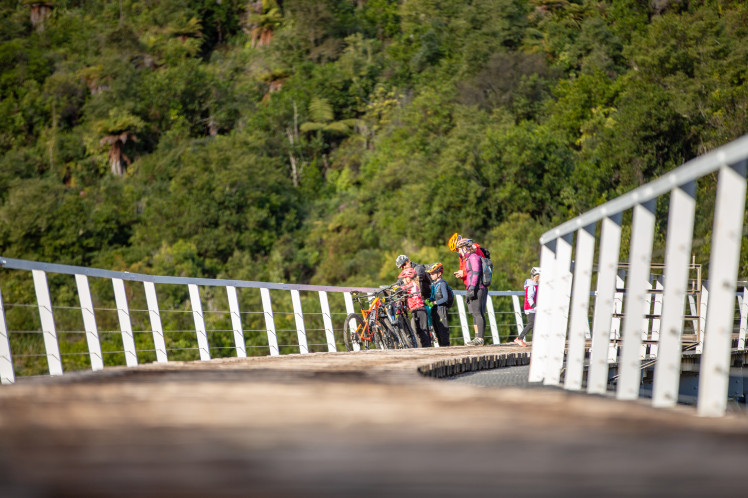 The Old Coach Road was for a while an important 15km link between two railheads: the railway that went north, and the one that went south, before they were linked by the Raurimu Spiral. From 1906 to 1908, passengers wanting to travel from Wellington to Auckland would disembark at Ohakune, stay at the Kings Hotel or Turoa Lodge, then take a horse and carriage through Tongariro National Park to Raurimu to catch the train north. But when the railways were eventually linked, the Old Coach Road fell into disuse. It wasn’t until 2002 that it was turned into a walking and biking trail, after the locals started to uncover the section between Horopito and Ohakune, including the original cobblestones in places. Along the way you’ll cross the historic and vertigo-inducing Hapuawhenua Viaduct (which was where AJ Hackett ran New Zealand’s first bungee jump in 1987), enjoy lush forest, and get views over rolling farmland. We recommend taking a shuttle to Horopito and walking back to Ohakune, because this direction includes more downhill, and you can then enjoy post-walk refreshments at the café in the gorgeously restored Ohakune Railway Station.

This magic spot not far from Turangi is very popular and for good reason. Rotopounamu is a crater lake and is named for its beautiful green hue. It is a 20 min walk from the carpark on the road, up and over the saddle, to the lake, and about another hour to circle the lake. There’s a beach on the lake that is great for picnics. One for the birdwatchers, North Island robin, kaka, kereru and falcon are all coming back to the area following predator control.

This area has incredible river walks (Whakapapa River) and is a great stopover if you are heading north. Travelling from Ohakune, Owhango is 40min along SH4, and has the Whakapapa scenic reserve, and the Owhango Domain. The walks along the river are beautiful and are popular with hunters.

make a reservation
or Check Availability

Advantages to you of Booking Direct »